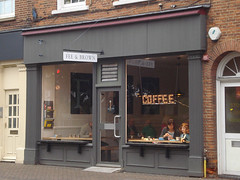 Cafe in Beckenham, specialising in interesting coffees and teas.

The decor is clean and modern, with matte black tiles on the floor, pale grey walls, pale wood tables, and modernist black and white art. A fully glazed frontage allows the sunlight in, supplemented by lamps suspended on long flexes from the ceiling. Smaller tables are set out in the front part, with two long communal tables further back.

Kake has visited three times now. On a Monday lunchtime in January 2015, there were three or four other customers in when I arrived a little before noon, and several others arrived while I was there, including a few children. Instrumental jazz was playing, not too loud. On a Friday afternoon in January 2016, it was fairly busy when I arrived a little before 2pm, with the only free seats being at the communal tables in the back. On a Thursday morning in March 2018, it was reasonably quiet when I arrived around 9:30am but got busier over the next two hours, with only around half a dozen seats left among the tables.

On my first two visits, a metal cup of tap water was brought along with the menus as soon as I sat down, my order was taken swiftly and efficiently, and the staff came around later to check if I wanted anything else (but with no pressure to order more). Service was a little slower on my third visit, but the tap water again arrived swiftly (this time in a glass) and the wait to order wasn't too long.

A pot of "Earl Beckenham" tea (£2.40 in January 2015) was delicious, made from loose leaves and whole bergamot flowers. The presentation was good too photo, with the milk served in a mini glass milk bottle and a cup that was really nice to drink from — substantial but not too thick. (Unfortunately by March 2018 they'd replaced their cups with hipster-style ones with overly small handles.) Soya milk is available, though I didn't take up this option and don't know if it costs extra.

A roasted vegetable and hummous sandwich (£4 in January 2015) photo was a little less impressive. The bread ("sliced deli loaf") was good, with a well-developed texture and flavour, but the roasted vegetables weren't what I'd call roasted — only very lightly cooked, and with a bit too much remaining rawness — and the hummous was fairly uninteresting. The accompanying salad had little or no dressing, but the leaves were interesting enough to rescue it.

They have free wifi — ask the staff for the password. However, they're not necessarily very work-friendly; a sign on the wall as of March 2018 notes that laptops are banned on Fridays and Saturdays and limited to an hour from Monday to Thursday. (This might be an hour per order, rather than in total, since I was there for two hours with two pots of tea and they didn't seem to mind.)

Kake's verdict: I'd happily come to Beckenham on purpose to drink tea here, and I should try the food again at some point.

Child-friendliness: Children's books and toys are provided, and there's a reasonable amount of space to park pushchairs. They have several highchairs, though they're the type with no tray and very little back support. There's a pull-down baby change in the (unisex) toilet. During the earlier part of our March 2018 visit, around half of the customers were preschool age.

Accessibility: A shallow ramp to get in. No further steps to the toilet, which is a single unisex one with plenty of space, though there's somewhat narrow access to it through two doors.