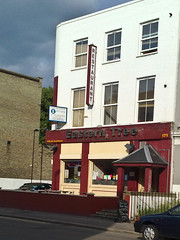 Eastern Tree was a Vietnamese restaurant on Coldharbour Lane between Camberwell and Loughborough Junction. It has now closed, and as of May 2010 the site is occupied by another business called Castello Bar.

A Vietnamese restaurant on Coldharbour Lane between Camberwell and Loughborough Junction. It used to be a bar called the Coast Bar and some of the decor appears to date from that time. There are also photographs of modern Vietnam on the walls which secretlondon hasn't seen in Vietnamese places before.

The restaurant has two rooms. The front one can be hired out for parties and has (possibly Vietnamese language only) karaoke. When secretlondon visited one Sunday in June 2009 a loud Vietnamese karaoke party was in full swing!

They only sell Vietnamese food and do some interesting dishes include frogs legs, fake meat prawns and lau (hot pot) dishes to share between three or four people.

secretlondon had a starter of nem nuong (grilled mixed meat skewers, £3.50) photo followed by ga xao dua chua (stir-fried chicken with pickled vegetables, £5.50) photo and fried rice (£2.50). The dishes were delivered when ready, rather than the staff waiting until I'd finished my starter. The grilled meat starter was a couple of kebab-like sticks. They had an interesting, offally taste and came with salad and fresh herbs, but no sauce. My main was nice - not very exciting but fine.

A sinh to sau rieng (durian smoothie, £2.50) photo wasn't a smoothie - it was durian and crushed ice in a dessert glass with a spoon. It was a dessert not a drink!

They do takeaway, and may do delivery. They are licensed (although I didn't try) and gave me a glass of tap water with ice and lemon when I sat down (without asking), which was nice.

secretlondon's verdict: I rather liked it. It is as interesting as the William, I think, rather than the Anglo-Chineseified stuff you can get elsewhere.

Accessibility: Three steps to enter. Toilets may be on the same level but the doors are fiddly to open.