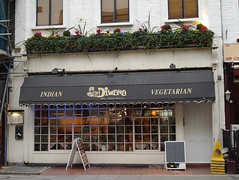 A vegetarian Indian restaurant on Drummond Street, near Euston Station. The eating space is split over two rooms side by side fronting to the road, with unflashy unrefurbished decor.

It gets fairly poor reviews in London Eating, particularly for service, but Ewan and friends had no trouble on our March 2008 visit. Our party of eight arrived to find the place mostly full, but they were able to move some diners to accommodate us at a long table in front of the window. Everyone received tap water fairly without further prompting and meals were brought without too long a wait.

Most people went for the dosas photo, which are a speciality of most restaurants along Drummond Street. Ewan's was the onion dosa photo, which was flat and served with a coconut sauce (coconuts are a big flavour in many of the dishes). Other dosas were rolled up, and not everyone was able to finish their meal as there was plenty of food. Ewan's dahi poori starter was odd and yoghurty but not bad by any means photo. The bhajya were crispy and plentiful photo.

Depending on one's point of view, the best aspect was that for eight people, including starters and drinks (though not everyone had these), the final bill was around £13 each. There was some confusion over the bill, as the waiter pointed out when we paid that the "S/C" was not a service charge but instead a surcharge (though it was never made clear for what), so we had to hastily recalculate. However, still great value.

They are BYOB, and there's a bottle shop next door.

They also offer an all-you-can-eat buffet at lunchtimes. Martin thinks the lunchtime buffet is very good (and better than the evening menu). There's a large range of different hot and cold dishes, all very tasty. I can't remember how much it costs, but it's pretty reasonable — cheaper than the evening menu from what I remember. It can be busy at lunchtimes — there is often a queue waiting outside when they open. It's worth getting there early to see the buffet in all its glory — all the salads and desserts are laid out in pretty patterns!

secretlondon visited on a Tuesday in November 2009. I had the special thali for £9 which had the 10% surcharge for eating in peak hours. The thali came with either 3 chappatis or 4 dosas. I had the dosas. The curries were uninteresting — peas, carrots and quite a watery daal. The shrinkhand was nice but quite yellow. It was okay and quite cheap but I've had better.

Accessibility: The toilets are up and down some stairs.