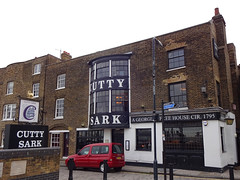 Young's pub next to the river in Greenwich.

It's quite characterful inside, with a low ceiling, exposed brickwork, and plenty of worn wood (though some at least of the "ceiling beams" are clearly made from thin boards nailed together). An original-looking fireplace sits at one end, next to an impressive freestanding wooden staircase which sweeps up to the upper floors. Seating on the ground floor is a mix of mismatched chairs at sturdy wooden tables, high stools, and cosy armchairs.

Outside seating is provided by a dozen long picnic benches lined up alongside the Thames Path. The river wall is quite low here, giving a good view across to the Millennium Dome and the towers of Canary Wharf.

Kake visited on a Monday morning in October 2018. Arriving at their opening time of 11:30am, I actually had to wait ten minutes to get in since they were late in opening. Two other customers arrived just as I was let in, both apparently regulars. Music was playing, fairly bland but not too loud.

The pumps were clipped for five ales: Young's Special and Ordinary, By The Horns Stiff Upper Lip, Adnams Ghost Ship, and Sambrook's Wandle. A pint of lime and soda was £1.85.

According to the Cutty Sark website as of October 2018, food is served noon-10pm Mon-Sat and noon-9pm Sun. As well as the regular menu photo, they have scotch eggs, sausage rolls, and pork pies on display behind the bar.

They have free WiFi, which requires registration but doesn't seem to validate any of the details.

Accessibility: No steps to get in. A very small amount of the ground-floor seating is up one step. There doesn't seem to be step-free access to the upper floors. No steps to toilets, including an accessible one with handrails, low sink, low hand dryer, and pull-down nappy change.