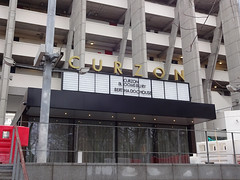 Art-house cinema near Russell Square Station, in the Brunswick Centre. Formerly under the management of Artificial Eye, it used to be known as the Renoir photo until its acquisition by the Curzon chain and subsequent refurbishment finished in 2015 (expanding it from two to six screens).

There are six screens, one large one of 150 seats (known as the Renoir screen, after the cinema's former name), and the others all around 30 seats each (the Lumiere, Minema, Phoenix and Plaza screens). There's one additional screen of 55 seats dedicated to documentary films (the Bertha Dochouse). Prices are highest in the large screen (up to £16 at peak times), a few pounds less in the smaller ones, while the Dochouse screen has its own ticket prices (never usually more than £9 as of June 2017). Note that the Dochouse only usually has around five minutes of trailers, whereas the regular screens have around 20 minutes including adverts.

There's a bar/cafe area on the main entrance level upstairs, with some seating outside. There are additional smaller bars on the two lower floors, where at times tickets may also be purchased.

Accessibility: The bar and screens are underground. There is an accessible lift to all levels, and while the marked entrance to the Dochouse screen is up a few steps, it can also be accessed via a step-free corridor on the other side of the building.