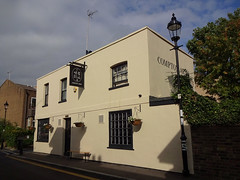 Pub tucked away on a side street in Canonbury, not too far from Highbury And Islington Station. It changed hands around 2018; see earlier version of this page for a description of what it was like before.

It looks small from outside, and when you get in you realise that it's really small, though a little further investigation reveals another (small) seating area around the left side of the bar. Out the back there's a part-paved part-decking courtyard beer garden with picnic benches.

The floor is varnished wood, the walls are half-panelled, and chunky (somewhat fake-looking) wooden beams run along the ceiling. Above the muddy brown panelling, the walls are painted an inoffensive magnolia, relieved here and there by framed items including a Penguin cover for George Orwell's Animal Farm. The front windows are small-paned bullseye glass, and lighting is provided by stylised streetlamp heads.

Kake visited on a Tuesday afternoon in September 2019. There was just one other customer at 3:30pm, apparently a regular. Retro music was playing, not too loud. The handpumps were clipped for Moor Nor'Hop and Ilkley Summer, and I gathered from the staff's conversation that they also had a Purity and an Adnams ready to go on. A pint of lime and soda was £1.80.

According to the Compton Arms website as of September 2019, food is served from 6pm Tue-Fri and from 1pm Sat-Sun, provided by Four Legs.

Accessibility: A large step with no handrail to get in. No further steps to the ladies' once you're in. Two steps to the lower seating area, from which the garden and the gents' are accessed.