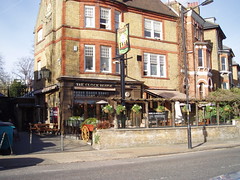 Kake visited on a Monday afternoon in October 2008. When I arrived a little after 4pm, there were a couple of other customers in but it was mostly empty. Service was friendly.

The regular beers available were Young's Ordinary, Special, and Bombardier; and the guest ale was Tribute (£1.45/half). The barman told me that the Tribute would at some point be replaced with Winter Warmer.

A sign outside said they do food all day.

Accessibility: Step-free access to get in, though there are (flat) cobbles between the street and the entrance. Level access to bar, toilets, and at least some of the seating (didn't explore the whole pub) including a couple of nice big sofas and the bit with the piano. Separate accessible toilet.