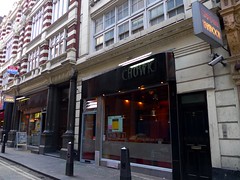 Indian restaurant on Denman Street, just off Piccadilly Circus, which rotates through different Indian regional cuisines, and provides excellent value for the area.

The restaurant is very large, with an upper level in several rooms, as well as a downstairs seating section. On Ewan's visit on a Thursday in October 2008, the upstairs appeared full but our party of eight was quickly seated downstairs, which had been kept empty. Just before ordering, we were asked if we wanted to move back upstairs, as they had cleared a space, though they were happy for us to be on our own downstairs as well. Generally, you can always find a seat with little waiting, and they tend to seat smaller groups (two or three people) upstairs.

The tables upstairs are joined together in long rows, and there's a certain amount of sharing of elbow space required (though diners aren't packed as tightly together as a lot of central London restaurants). Seating upstairs is on soft cubes with no back and you can't tuck your feet under, which could be uncomfortable for some. However, downstairs the tables and chairs are fairly conventional.

On the menu, they do a "regional special" where you get a discount if you have a starter, main course, and dessert from the same region (as of July 2009 this was £18 for vegetarians and £20 with meat). The regions change on a monthly basis.

Main courses are presented on interlocking crescent-shaped plates, a nice touch. The main courses Dean had in July 2007 were brought over in three, smaller, separate plates and a crescent one for eating from, and the food was very nice food. The kulcha is recommended, and the total price came to £35 for two starters, mains, drinks, and a side. Ewan has visited twice now, and concurs that food itself was excellent, not oily at all. An bagare baigan curry (£7 on its own) photo had entire baby aubergines, cooked in a peanut, poppy and sesame sauce, and had a subtle kick to the spices (but not too much; it wasn't rated as one of the highly spiced curries after all). The bread was also tasty, and they were able to quickly bring out another naan when requested halfway through the meal.