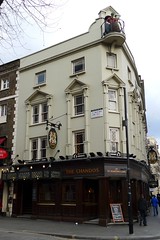 The ground floor is uncarpeted with a range of booths around the edge of the fairly large space, and standing room in the middle of the room. A little alcove to one side holds a dartboard. There's a lounge upstairs, with carpet, sofas, coffee tables, and window seats (and its own bar).

It gets very busy after work and at weekends, due to its location just off Trafalgar Square, so be warned. On our February 2013 visit, arriving around 6:30pm on a Tuesday evening we had to hover for a while before getting a seat.

They have Sam Smith's Old Brewery Bitter on handpump (though this may just be on the downstairs bar — not checked the upstairs one). In February 2013, a pint of lime and soda was £1.04.

They do food, standard Sam Smith's options, though they stop serving fairly early in the evening (7pm on the Wednesday of our visit). In February 2013, Kake's three-cheese macaroni (£6-something) wasn't bad, though the garlic bread that came with it was rather stale.

Accessibility: The loos are in the basement, down a flight of stairs with a handrail on one side.