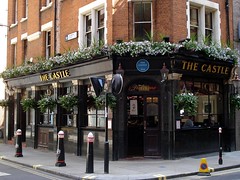 The Castle was a pub in Holborn. It has now closed.

As of October 2018 the premises are under substantial refurbishment photo, and according to a poster in the window will be reopening as something called 26 Furnival Street.

Pub in Holborn with eight handpumps.

A plaque above the door bears the date "1541", which is quite impressive. In October 2007 it was bought by the Red Car Pub company (who also run the Wheatsheaf on Stoney Street). The interweb suggests it wasn't very good before, so the change of management does appear to have brought improvements.

It's not really a pub for a long drinking session; the upstairs bar is only open at lunchtimes (until 3pm), and seating in the downstairs bar is limited to bar stools, which are spread around the edges of the room leaving an open space in the middle for standing and drinking. Decor is dark wood, bare floorboards. The windows are a decent size, and the "drinking shelves" around the edges of the room feature small stained-glass privacy screens.

Beers available on Kake and bob's June 2008 visit included Redcar Summer Ale, Redcar Best, Castle Rock Elsie Mo, White Horse Wayland Smithy, Oakleaf Nuptu'ale, Skinners Betty Stoggs, Banks and taylor Dragon Slayer; all £3.05/pint except one of the Redcars. The beers were listed on a blackboard beside the bar, along with a "coming soon" list. The two that Kake tried were in good condition. Staff were happy to give tasters.

The handpumps were also full when Billy visited in November 2008 and the bar staff were happy to chat about beers, running pubs and the universe in general. The barman (landlord?) also apologised that he hadn't updated the "What's On" board yet with the recently on Glencoe Oatmeat Stout, after seeing Billy walk around the bar to look at the pump badges, which was very tasty as were the other beers tried.

When Kake arrived around 15:30 on a Thursday afternoon, there were only a couple of other customers. Unsurprisingly, given the area, it started to fill up from around 17:00 and was packed by 19:00 and was mostly empty by 19:30. Music was fairly decent reggae/ska early on, but this turned into fairly uninteresting pop once the post-work crowd started arriving. It wasn't too loud, and once people had arrived it was mostly drowned out by conversation.

Food is served at lunchtime and in the evenings until 9pm. Prices are fairly good and the pie, with mash, veg and gravy, was a generous slice taken from a large round pie, and looked rather tasty.

The upstairs bar is bookable.

Accessibility: One of the entrances has a step to get in, and the other is flat. Gents is is in the basement, ladies' is up a narrow and winding staircase (though there are fairly basic handrails on both sides).