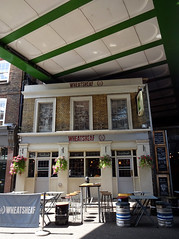 Young's pub in Borough, right next to Borough Market.

It was previously managed by the Red Car Pub Company (see older version of this page for a description), but was forced to close on 7 January 2009 due to work associated with the Thameslink upgrade; the work involved removing the top floor of the building to make room for the new railway viaduct being built over Stoney Street. The management moved to the old Hop Cellars around the corner on Southwark Street, initially opening it under the name of the Wheatsheaf, but later renaming to the Sheaf, presumably to avoid confusion with the now-reopened Stoney Street version.

Young's retained the lease of the Stoney Street building and reopened it as a pub in December 2012.

It still has its central bar, with seating areas at both sides, and they've also added an extra flagstoned seating space at the side, open to the air but sheltered under the railway viaduct. All the interior seating is on high stools. There's also seating for around 25 people out the front under the railway bridge, mainly on repurposed beer kegs with pleather padded tops, arranged around small square folding tables.

Kake visited on a Monday lunchtime in August 2019. Arriving at their opening time of noon, I was the first customer of the day but two others were in hot pursuit, and by the time I left half an hour later there were at least a dozen people in. Service was friendly and helpful.

The handpumps were clipped for Young's Special and Ordinary, and St Austell Proper Job. A pint of lime and soda was £2.20.

Although the menu advertises vegan options, they didn't have the vegan main course, so I just had a starter/side. Again I tried to order the vegan option — vegan mozzarella and beetroot bites with spring pea and mint sauce — but they brought me the non-vegan mozzarella bites with tomato and basil sauce instead (£5) photo, and since I was in a bit of a rush (and am not vegan) I just ate them instead of asking for a replacement. They were fine; crisp and greaseless on the outside, with pleasingly stretchy cheese on the inside. The sauce tasted fresh and home made, but I did wish there was a little more of it.

Accessibility: A step to get in (looks smaller from outside than it actually is). All of the interior seating is on high stools. Steps with sturdy handrail on one side to both sets of toilets.