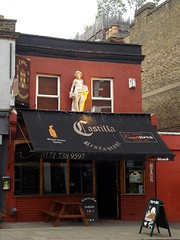 Tapas bar/restaurant in Battersea. It has two distinct areas; a more casual bar area at the front and a more restauranty bit at the back.

bob and Northern Steve visited late on a Thursday evening in March 2009. On arrival around 10pm, we were shown to a table in the bar area and then asked if we wanted food or just drinks. They offer a range of tapas as well as some main dishes, and we decided to go for tapas.

The cold tapas and fish dishes arrived first. Salmon croquettes (£4.60) were fine. Marinated anchovies (£3.90) were very tasty, although not the largest bob has ever seen. The fried squid was fine, but just a touch overcooked. Chorizo in wine (£4.60) was very good. Patatas bravas (£4.20) were also very good; the sauce was light, but had quite a kick to it. The mushroom dish was fine. We were provided with bread at no cost and indeed got a generous refill of it when we asked.

A glass of rioja was £4.10 and quite drinkable. San Miguel was £3.30. They have an extensive cocktail list, though we didn't try any. We were given a free digestif with our bill, which included an optional 10% service charge.

Music was playing quite loudly during our visit — '90s rock — at least in the bar area.