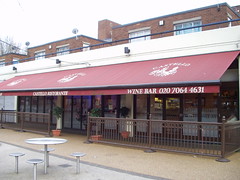 Castello was an Italian restaurant near Bermondsey Station. According to Google Street View, by April 2015 it had closed down and turned into a Sainsbury's.

Note: As of December 2013, Southwark News reports that the premises have been sold to Sainsbury's.

bob visited in late 2006. The menu was a relatively standard Italian menu with quite a few specials. I had a pizza which was fine, though I thought the pizza dough was a bit airy and made the crusts very fluffy. The garlic bread with cheese had an awful lot of cheese since it was basically a pizza base.

Starter, main and a drink came to about £13.

Quite popular in the evenings, so you might want to book.