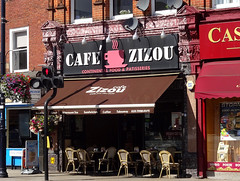 It's quite small, with 8 seats outside and about 20 inside. The menu includes breakfasts, sandwiches, salads, jacket potatoes, and hot meals like lasagne and meatballs. The Mediterranean influence comes in via savouries such as croque monsieur, savoury croissants, various quiches, borek, Greek salad, and so on. Desserts are on display in a cabinet. There is table service.

bob visited on a Saturday lunchtime in October 2015. Although it was a match day, there was plenty of seating.

I had the full English breakfast (£6) with an extra sausage photo. The eggs were very well cooked; the yolk was still runny and the white was cooked through but not rubbery. The bacon was disappointing; it was sliced too thin for my taste, and almost ham-like. The sausages were OK. The mushrooms were pretty good.

A pineapple surprise smoothie photo (£3.10) was freshly made and not too sweet.

Shallow ramp to get in, and level to the toilets, though the toilets are very cramped. The tables and chairs aren't fixed to the floor, but are tightly packed in.