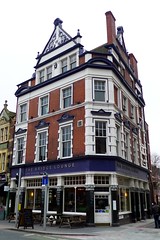 The Bridge Lounge was a pub on Tooley Street, near Tower Bridge. It closed down in June 2019. As of August 2019, the premises are being refurbished to reopen as a different business called the Two Bridges.

Pub/bar/dining room on Tooley Street, near Tower Bridge. BITE says it used to be called The Elusive Camel.

bob visited on a Tuesday night in January 2009 at about 10pm. There were a few people in. I had a pint of Adnam's Bitter (£3.10) which was fine. There were newspapers available.

secretlondon visited just before 2pm on a Wednesday afternoon in May 2009. I had a large quesadilla (£6.75) photo and a latte (£2) photo. Sandwiches were around £5. They also have a specials board and an upstairs which I didn't investigate. Inoffensive soft rock was playing in the background. There were tables outside.

secretlondon visited one Friday evening after work in August 2009. It was briefly busy but cleared quickly. A small group had booked a bit of upstairs. My pint of Hoegaarden was £4.20 I think. There was a bizarre hole in the wall upstairs where we were sitting.

Accessibility: At least one of the entrances was step free and one of the others had a very small step. There is a disabled toilet.