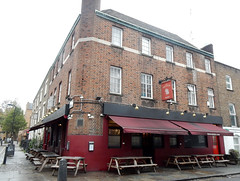 Nice little pub round the side of Euston Station, in the Good Beer Guide. Located on the corner of Cobourg Street and Euston Street, it's not only handy for the station but also for the curry places on Drummond Street.

Inside, it's a little cramped, with relatively large tables for the amount of space meaning that there's not always as much room as one might like to fit chairs in around the edges. It can also get a little stuffy, since the windows don't seem to open and there's not a lot of ventilation. Picnic table seating, where smoking is permitted, can be found outside on the pavement; this is pleasant enough, as these streets are not busy ones.

We've now visited on several occasions; it tends to be fairly quiet on weekend afternoons and totally packed on Friday evenings. However, it's rather more hidden away than, say, the Doric Arch, so possibly a better bet at peak times. On a Saturday afternoon in April 2008, redcountess noted that there were a number of well-behaved children in attendance, so it seems to be child-friendly too (though we don't know if there's a curfew).

They have five handpumps for beer, plus up to eleven other ales on gravity dispense. Most if not all of the ales are priced at £3/pint as of April 2009, though CAMRA members get 50p off every pint; this is an ongoing offer, and the discount has even increased over time, from 40p to 50p in early 2008. They also have Addlestones cider (£3.80/pint as of April 2009), though the discount doesn't apply to this. For those who want to try lots of beers, they now have third-pint glasses, so you can order a "taster board" of three third-pints.

As of April 2009, food is served noon-9pm every day. They are very keen on pies, which are all £8 including mash and veg (£5 to CAMRA members; they also have an offer Monday-Thursday in which two selected pies each day are £5 to everyone). It should be noted however that these are heretical pies, being actually stew in a dish with a puff pastry lid popped on top photo of pie exterior, photo of pie interior.

The rest of the menu photo is also fairly standard pub food; burgers (£7-7:50), fish and chips (£7.50), sausage and mash (£7), steak (£12). Vegetarian provision has improved slightly over time, with five choices as of April 2009; the "all English three cheese" pie, two pasta dishes, Caesar salad, and ploughman's with cheddar or stilton.

In September 2007, Kake's "prime beef Tex-Mex burger" with bacon (£7.50) (photo) was of average quality overall; although the bacon was thick and the quantity of burger (two patties) generous, the burgers were rather underseasoned and the advertised "Hot!!"ness was entirely absent. Neither the accompanying chips nor the enclosing bun were interesting enough to rescue it from averageness. Still, it was ample, and it was edible.

In April 2008, redcountess's roast beef lunch was pleasant enough, although the gravy was overly peppery. We also shared a very generous portion of chips, which were hot, crispy, fairly thin, and good (also pre-salted).

On a January 2009 visit, despite being out of the three cheese pie, Ewan's vegetarian pasta dish was perfectly good quality, and rather tasty in fact.

When Robbie visited in March 2010, there were 15 different real ales available, none of which are mentioned in the list above, so the beer selection is indeed very varied, and rather tasty. A plate of chili con carne with chips was £6.49 and had the decency to be quite generous and actually have some warming spiciness in the chili. A garlic loaf for £4 was a good size and quite tasty, if slightly chewy. Menu prices appear to have remained unchanged on the whole.

Accessibility: Step-free entrance at the side, and step-free to the toilets too. It's quite a small place, and crowded with furniture.