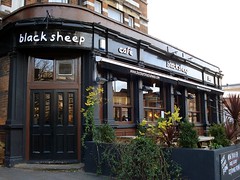 Black Sheep was a pub on Camberwell New Road; it has now closed. As of March 2012 the premises are occupied by a different pub called The Kennington photo.

Pub on Camberwell New Road, nearer Oval than Camberwell. They have a sister pub in Crystal Palace (and used to have one on Grove Lane in Camberwell, but this has now closed).

It's one of the more gentrified pubs in the area (along with the Bear further down the road). The interior features dark-varnished wood quite heavily — hardwood floor, chairs and tables. It's not standard-gastro, though, either in food or in decor; the chairs and tables actually match each other, and the tables are a sensible size for smaller groups of 2-4 people. Large windows let the light in at the front, while there's a darker, cosier area towards the back, with four sofas and padded cuboid stools.

Kake visited on a Monday afternoon in September 2010. The only real ale available was Black Sheep bitter (£1.75/half) — another pump had the clip (Old Speckled Hen) turned around to indicate it was off. Non-handpump draft options included Amstel, San Miguel, Strongbow, Guinness, Becks Vier, Staropramen, and Hoegaarden. When I arrived around 4pm there were four other customers sitting at the bar chatting with the barstaff. Music was playing, fairly varied stuff from indie to Abba.

secretlondon visited a couple of years earlier, on a Sunday in September 2008. I had a pint of Hoegaarden (£3.70), served in a Tetleys glass photo. They had a pub quiz on (it happens every Sunday apparently), and a young (studenty?) crowd. A TV was showing sport with the sound off and a leaflet said that they show football. Once the pub quiz was over they all left leaving half a dozen old men, and the pub started to play music rather than have the TV sound on.

They run happy hours and sell cocktails photo. There are tables outside at the front where you could smoke. There were signs advertising free wireless although I couldn't check this.

A blackboard seen outside in December 2008 advertised a "quick £3 lunch menu" Monday to Friday — not sure if this is still available though. A sign seen in September 2010 warned of a resident "soul and disco" DJ on Friday nights from 8pm.

Accessibility: One of the side entrances has no steps, and the front has a steep ramp and a small step. The toilets are on the same level.