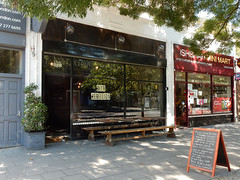 Pub in Peckham. It was previously run by the Late Knights brewery, who also had similar establishments in Crystal Palace and in Sydenham. This all changed in September 2016, but the pub remains open.

It's quite stripped-back inside, with a bare concrete floor and tall, sturdy dark-varnished wooden tables flanked by black plastic stools photo. A handful of smaller tables out the front offer a view onto the busy Queens Road, and an old school gym bench against one wall provides last-resort seating. The fully-glazed frontage allows in plenty of light during the day, though the sparsity of light fittings suggests it's rather more dimly lit after sunset.

At the very back is a small bar with eight unclipped handpumps and a set of keg taps; the list of what's on offer is on a chalkboard to one side photo. A shelf of glasses allows the drinker to choose their own size and style. There's also a bottle fridge, and a small shelf of spirits. A window running along an internal wall next to the bar offers a view into the "cellar".

Kake visited on a Thursday afternoon in September 2015. There were no other customers when I arrived a little after 2pm, though by the time I left an hour later there were half a dozen, mainly sitting outside. Metal music was playing, a little louder than would have been ideal if I'd been trying to have a conversation (then again, this is probably the minimum appropriate level for playing metal).

Four cask ales were on offer, all from the Late Knights Brewery, and all priced at £3.60/pint or £1.80/half: Delicious Brown, Penge Porter, Wormcatcher, and Little Bitter Beer.

Food is limited to bar snacks, which on our visit consisted of karkli (subtitled as "a tasty crunchy lentil snack"), pork sticks ("kinda like salami") and crisps ("you know what crisps are").

There's free WiFi, with the password written on a chalkboard on the wall.

Accessibility: No steps to get in. Most of the interior seating is at high tables with high backless stools. No steps to the toilet, which is a single large cubicle with grab bars, a high toilet, a low sink, and an alarm cord (but a high lock and a high hand drier inconveniently positioned in the corner blocked off by the sink).