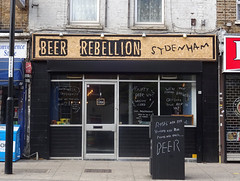 Beer Rebellion was a small pub in Sydenham, run by the Late Knights Brewery. It closed down in February 2017.

Small pub in Sydenham, run by the Late Knights Brewery.

Opened in October 2015, it follows the same formula as Late Knights' outposts in Gipsy Hill and in Peckham. The space has been converted from a bookmakers, and the decor is fairly basic — plain walls, mismatched tables and chairs, bare lightbulbs. There are no handpumps on the bar — the cask ales are lined up along one wall, beer festival style. The bar itself has several beers and a lager on keg. Behind the bar there is a fridge with a decent range of bottled beers, wines and spirits, plus some boxes of interesting-looking cider. Food is provided in the evenings by rotating pop-ups, which use the open kitchen to the rear.

Kat and Rick visited on a Saturday afternoon in March 2016. When we arrived there was only one other group (of the CAMRA persuasion) present, possibly due to the sunny weather — inside it was relatively gloomy. By 5pm though, around half the tables were full. As you would hope, all the Late Knights beers were well kept, as were the couple of guests we tried. All but one of the cask beers were £3.60/pint, keg beers were £4.20/pint. The advertised pop-up menu that evening was Thai food, however we didn't stick around late enough to try it. The staff were cheerful, chatty, and happy to recommend beers suited to our preferred styles.

Kat's verdict: I prefer it to the Gipsy Hill branch as there's a bit more space. As a local, I'll definitely return.

Accessibility: Two steps to get in, one low at the door, then a much higher one. Once inside the seating and bar is on the same level. Another two steps up to the toilets. The ladies was a bit cramped; the hand dryer was at head height.