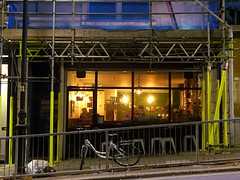 Beer Rebellion was a small pub just across the road from Gipsy Hill Station. It closed down in October 2018. By mid-2019 it had been replaced by a craft beer bar called the Bull & Finch.

Small pub just across the road from Gipsy Hill Station.

It was previously run by the Late Knights brewery, who also had similar establishments in Peckham and in Sydenham. This all changed in September 2016, but the pub remains open.

It's very small inside, and all the ground-floor seating is on high stools photo. However, there's also a basement level with armchairs photo and tables flanked by plastic bucket chairs photo, as well as half a dozen stools with tables on the pavement out the front.

bob visited on a Sunday afternoon in July 2016. Electric rock music was playing. There were a lot of beers on. Squawk Small Pale (£5.60/pint) was cold and hoppy, which was fine since it was a hot day. Late Knights Wheatus (£4.70/pint) was drinkable. Tap water was provided on request in a half-pint glass with ice.

They have free WiFi, with the network ID and password chalked on a board on the wall.

They previously did food, with a menu of about 50% burgers photo of menu in July 2016, but stopped doing this in October 2016.

Accessibility: No steps to get in, and it's level to the toilets (including an accessible one), but all the seating on the ground floor is on high stools. It's also very small inside.