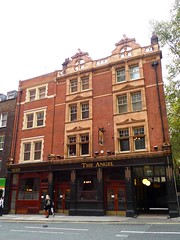 Sam Smith's pub just off Charing Cross Road, on the Covent Garden side.

It's not very attractive on the outside, but the three bars and courtyard on the inside make it well worth a visit. It can be difficult to figure out how to get in, as there are separate doors for each side of the bar, and it's not possible to get between the areas without leaving and going back in the other doors.

Note that although you can smoke in the courtyard, it's only open until 5:30pm, and isn't open at all on Sundays.

Old Brewery Bitter is available on handpump. It was quite drinkable on bob's February 2008 and May 2013 visits, but Ewan found it less than appealing on a March 2009 visit.

Accessibility: The gents' toilet is in the basement. Not sure about the ladies'.