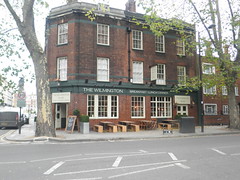 A popular pub on Rosebery Avenue just by Exmouth Market, in Clerkenwell. As of 31 October 2013, the pub has been rebranded as a Capital Pub Company pub and shortened its name from The Wilmington Arms photo. The comments below pre-date these changes.

This refurbished pub near the intersection with Farringdon Road may use some of the cliches of the gastropub conversion — worn wooden tables with benches, bare floors, chalkboard specials — but it doesn't sacrifice any of the essential qualities of a good pub. Its additional focus on hosting a variety of events in a separate live venue ensures that there are always new crowds of young and trendy drinkers, so even on a Thursday evening the place was still just about full.

The pub itself stretches back to take in two conjoined rooms, with plenty of tables and a couple of booths near the back. Out front there are benches alongside the road. The live venue space is on the other side of the bar in a side room and has a separate entrance from the street.

The bar has the usual range of dependable draught lagers like Amstel, Heineken, Budvar, Hoegaarden, and Guinness (£3.30/pint). There are also a couple of handpulls for ale, which seem to be tied to the Greene King brewery — on our visit in May 2009, they were just running out of the Olde Trip (£3.10/pint) and had soon put another on in its place, and in July 2009, the beers were Greene King LBW (a cricket-themed beer for the Ashes) and Bateman's XXXB (£3.10/pint), while in February 2011 the St Edmunds ale was in good form. Strongbow is available on draught for cider drinkers. Spirits are jokingly split into categories (OAP vs ASBO, etc.)

Food is served noon-9pm Monday to Thursday, noon-4pm Friday, and 1pm-8pm on Saturday and Sunday. There's a seasonal menu, with a few snack-type foods (a bowl of chips, or hummous with pitta bread, £3.50, the latter of which came with slightly toasted pitta and a nice spicy hummous) and a variety of mains photo of menu in July 2009. A separate chalkboard lists daily specials as well as which of the Pieminister pies are on offer. Ewan's posh cheese and onion pie (£8) was perfectly decent, served with either mash or chips, as well as some slightly over-cooked peas photo.

Accessibility: There is no step to get in, and although toilets are upstairs, there's an accessible toilet at the back of the ground level with a radar lock.