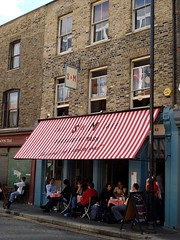 The S&M Cafe is sausages and mash - no spanking by goths, fortunately or unfortunately, depending on your outlook. It's a nice little restaurant decorated 50s diner style with bright red checked plastic tablecloths and the atmosphere is relaxed. There is a room upstairs which can be booked for a large party. There are few other locations (including Essex Road and Portobello Road), but this outlet is near Liverpool Street.

Bec says: Starters and mains are traditional, but most people go for the S&M mix and match for £8.25 - that is, you pick out 3 sausages (loads of different ones including vegetarian) from the menu or the sausages of the week menu, a mash, a gravy, and a veg. I had three veggie sausages - spinach & mature cheddar, glamorgan, and another one I can't remember because it was a few months ago and the menu has changed - but all were gorgeous and I was pleased that the glamorgan featured on the sausage of the week menu. I had spring onion & herb mash, onion gravy, and mushy peas and it was fantastic.

Sam says: The "Traditional London" sausages are also delicious, and just what they say - perfect sausages made of sausage and nothing else. My companion says that the wild boar sausages were also very good indeed, dense and meaty and delicious. The cauliflower cheese was nicely al dente, with very good sauce. However, the bubble and squeak (one of the mash options) was a definite disappointment. What we actually got was mashed potatoes with green peas mixed in, which is not something I'd ever heard described as 'bubble and squeak' before. The blueberry crumble was also good, but incredibly sugary.