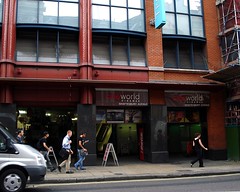 Cinema in the Trocadero with a frontage (pictured) on Shaftesbury Avenue.

Despite the redevelopment of the Trocadero building, the cinema which occupies its western end remains open, with its main entrance now up the escalators pictured here. There's also a (well-hidden) single escalator up from the Coventry Street side, alongside a concession theatre booth, though it is signposted for a shisha cafe.

There's a shabbiness to the building, though Cineworld have done the best they can to keep things clean and tidy in the cinema, even if a seating space in the lobby seems underutilised, with just a few stray chairs and tables. There's a main box office through the first-floor entrance to the cinema which is always manned, though as with all their cinemas you can also purchase tickets from the (smallish) snacks kiosk to the rear of the entrance lobby. There are also a couple of automated ticket machines. All the cinemas are up further escalators, with seven in total (two on the second floor, and then five more smaller ones on the fourth floor). The third floor, between the two auditorium levels, has another (less busy) snack bar as well as toilets.

The cinemas themselves are well-equipped, all fairly standard modern black boxes with a gentle rake and comfortable seats. There's a little interest to some of the antiquated decorations seen along the main escalator ride up from the lobby level, but little of architectural interest remains inside the building.