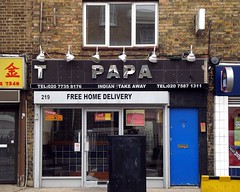 Pappadom was an Indian takeaway on Camberwell New Road in Camberwell. As of August 2013, the shopfront has turned into a chicken shop, though they still seem to be operating as Pappadom at the same address for online ordering via Just Eat.

secretlondon has ordered from here a few times now. The food is okay and they have a variety of vegetarian dishes. It's a step above normal Anglo-Indian X in Y sauce but still probably isn't that authentic. I liked the pindi choley (Punjabi chickpeas), and would like to try more of the vegetable dishes.

They do two thalis and have a special offer for £10 which is any starter, main, side, and rice and/or naan (the menu says rice and naan, Just Eat has rice or naan). It's worth noting that their paper takeaway menu photos differs slightly from the Just Eat menu.

Every time secretlondon has ordered it has taken the full 45 minutes to get here, and I'm really local. This could mean that they are often late, as suggested by some of the comments linked below.