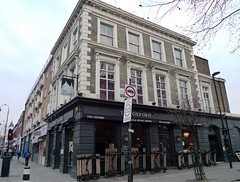 Note: According to Kentishtowner, as of early 2018 the Oxford has been sold and will close at some point for redevelopment.

They have three hand pumps (with Brakspear, Ruddles County, and Doom Bar on billy's November 2009 visit) and the beer is kept quite well, coming in at about £3.25 a pint. They also have a small array of lagers, including Sagres and Amstel, as well as Addlestones cider and a selection of bottles.

The pub sells itself on its food and the menu looks varied and interesting, with steaks, pork belly and pie sitting next to bream, gnocchi and salads. Starters range from £4-7 and mains from £10-16. They also have a range of puddings at £5 and a cheeseplate at £7.50.

The pub is split in half, with a dining area at the back. This means that the front is generally more full than the back, and there is limited seating if you are not eating. There are some picnic tables outside and the license covers their use for drinking until 11pm.

The toilets are at the back of the pub through the dining area, which is quite crowded with tables, making it difficult to get through when the pub is busy.