Blog
Contact
About
(redirected from Only Running Footman, W1J 5DE) 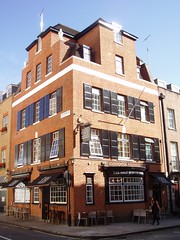 The Only Running Footman was a gastropub in Mayfair, just off Berkeley Square. It has now closed. As of mid-2016, the premises are occupied by a (non-gastro) pub called the Footman.

A gastropub in Mayfair, just off Berkeley Square. Its name was shortened sometime during the 2000s from the original, and even more idiosyncratic, I Was the Only Running Footman.

This fairly simple square corner building has two floors dedicated to the pub. On the ground floor, most of the room is taken up by tables laid out for dining (with starched white tablecloths and place settings). There is a small drinking area to the front of the building, mostly on stools (of which there are eight or nine) under the windows. There are some tables out the front and side for outdoor drinkers (and smokers). Upstairs is a more formal restaurant, open for lunches and dinners.

On Ewan's visit on a Saturday afternoon in November 2011, there were quite a few downstairs tables in use (the upstairs was empty), and a few drinkers were in, but there was still space.

There are three handpulls for ale at the bar, with Young's Bitter, Bombardier, and Greene King IPA in November 2011. Draught taps dispensed San Miguel and Amstel lager amongst others, as well as Aspall cider. The wine list is rather more extensive, as you'd expect for the area, taking up several pages.