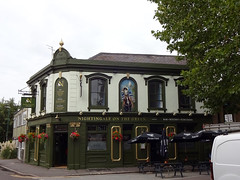 Pub in Wanstead, previously known as the Nightingale photo.

The long-standing landlords departed for health reasons in September 2017 (see old version of this page for a description of the pub under their management), and although the pub did reopen shortly afterwards, as of February 2018 it was once more closed. However, in July 2018 it reopened under new ownership and with the new name of Nightingale on the Green.

It's divided into several small areas inside, though there are no doors between them. Entry is into the bar area, with bare-boarded standing space, a mix of low and high stools, and a wooden bar with gantry above. A cosy snug-like space is off to one side. Around the back of the bar is table seating, leading through to a back room labelled "Madame Butterfield's Lounge" (and apparently available for hire).

Both interior and exterior were smartened up in the refurbishment that preceded the reopening, though pleasingly this was achieved without damaging the character of the place. The old green colour scheme has been retained (but made less garish), and the interior made to feel less cluttered without becoming sterile. Overall, the refurbishment seems to have succeeded in its goal of creating an updated traditional-style pub.

Kake visited on a Tuesday afternoon in September 2018. There were quite a few people in when I arrived a little before 2:30pm, many of them sitting and conversing on stools at the bar. Music was playing, mainly '90s rock, not too loud. The handpumps were clipped for Sharp's Doom Bar, London Pride, and Greene King IPA. A pint of lime and soda was £2.

According to the Nightingale website as of September 2018, food is served noon-3pm and 6pm-9pm Tue-Fri, noon-9pm Sat, and noon-6pm (Sunday roasts only) Sun (no food Mondays).

In September 2018, Kake's salt and pepper squid (£6.50) photo was good, with a light but well-seasoned batter and plenty of flavour in the squid itself. It came with a side salad of spinach leaves that initially looked overly wilted, as if dressed too far in advance, but actually this was delicious, with a subtle umami flavour in the dressing.

Kake's verdict: I'd come back if I was in the area.

Accessibility: A step to get in at both entrances, but the one at the side entrance is only an inch or so. No steps to seating, bar, or toilets once you're in. There are steps to the back garden.