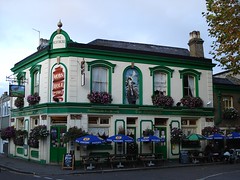 The interior is divided into a number of interconnected small rooms, and the decor is fairly traditional.

Kake, Ewan, Ruudboy and other Tube Walkers visited on a Saturday afternoon in November 2007. There were quite a few other customers but we still managed to find seats, in one of the smaller rooms (which would probably have held about 12-14 people if they were all good friends). We sampled the Deuchars IPA (£2.30/pint), Doom Bar (£2.75/pint), and Scrumpy Jack (£2.85/pint). The 2008 Good Beer Guide says they have a large range of malt whiskies, as well as a fair number of bourbons and vodkas, but we didn't try any.

Kake and bob visited again on a Wednesday afternoon in May 2011. The ales on this occasion were Rudgate Ruby Mild (£3.45/pint), Young's Special, Timothy Taylor's Golden Best, Courage Best, and Oxfordshire Ales Pride of Oxford (£3.45). Neither of the two members of staff on duty behind the bar seemed particularly knowledgeable about the beers, offering only "it's an English ale" in response to a question about what type of ale the Pride of Oxford was.

As of November 2007, fairly standard pub food including several vegetarian options (veggie sausages, nut cutlets, bean burgers, etc) is served lunchtimes Mon-Sun, with an extension to 6pm on Fri-Sun. They also have a curry night on Wednesdays, where you can get your choice of curry (including a vegetarian option) along with rice, chips, or naan, and a glass of wine, for £8 (served until 10pm). On the regular menu, they make a point of promoting the all-day breakfast, which looks rather good value at £6 for egg, bacon, sausage, black pudding, mushrooms, tomatoes, beans, fried bread, fried potatoes, bread + butter, and bottomless tea or coffee. See Kake's photos of the menu as of November 2007.

Quiz night is Monday from 8pm, according to a sign spotted in November 2007. There's also a pub dog!