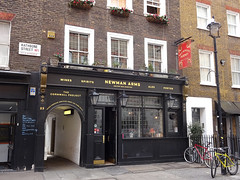 A long-standing but tiny pub in Fitzrovia with plenty of literary connections, like a lot of the pubs in this area.

The main pub room downstairs is friendly and cosy, with fake bookcase in one corner (as well as some actual books along the windowsill), stone slab floor, and a small seating area. There are only three small tables serving the banquette seating under the front windows, as well as some high stools along the side opposite the bar, so it's difficult to get a seat if you go when it's busy -- which is most of the time.

On a Thursday evening after 6pm the place was completely packed both inside and outside, making it difficult to get to the bar. Even so, it doesn't seem too oppressive (perhaps because so many people choose to stand in the street), and service remains friendly.

They have two handpulls, with London Pride (£3.20/pint) and Black Sheep Bitter, and these don't appear to change. There are also the usual lagers, as well as Stowford Press cider.

Upstairs there's a separate restaurant, which seats about 20-25. It used to specialise in pies (see older version of this page for an assessment), but as of 2015 it's run by the Cornwall Project, who also do the food at the Adam and Eve in Homerton.