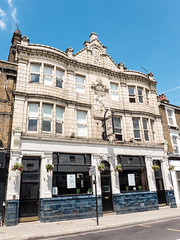 Pub in Homerton, in the Good Beer Guide.

It's quite large inside, and divided into several different areas each with their own ambience. On the right-hand side at the front is a large and somewhat sparse room photo which nevertheless has some nice touches such as decorative mouldings on the high ceiling, the remains of dimpled-glass room dividers, and flower buds in beer bottles on the tables. A dart board hangs in one corner (though with tables in front of it), and there's a pool table at the back.

To the left of this, around the other side of the bar, is a raised dais with cosier and more dimly-lit seating, and some rather nice stained glass. Further back is a room with another pool table — this one rather uniquely L-shaped. Finally, outside seating at the back includes an astroturfed beer garden with picnic benches.

Kake and Ewan visited on a Tuesday evening in September 2015. When we arrived a little before 5pm, there were a couple of other people in, and by 6pm there were about a dozen. Music was playing, slightly louder than ideal, and a little later it was joined by football commentary, which made a rather odd mix.

According to their website as of August 2015, food is served 4pm-10pm Mon-Thu; noon-10pm Fri-Sat; and noon-6pm Sun. A tiny regular menu consisting of one beef burger and one vegetable burger photo plus sides and bar snacks photo is supplemented by a substantial array of specials, written up daily on a chalkboard example photo.

Kake's root vegetable burger with Cornish gouda (£8 including chips) photo was pretty good. The slice of cheese, although very thin, really made a difference to the flavour, and was in fact just the right amount. Some of the vegetables in the burger (carrots, celery) were still quite crisp, adding interest to the texture. It looked quite tall when it arrived, but it easily squished down to a size suitable for eating. The chips were skin-on, and tasty enough, though there was a surprisingly high proportion of little scrappy bits.

Ewan had one of the specials — BBQ cauliflower, spelt tabbouleh, celeriac puree, and BBQ heritage carrots (£8) photo. This was perhaps a little less substantial than ideal.

They have free WiFi which doesn't require sign-in or a password.

Child-friendliness: The front window has "children welcome" stencilled on it, and the menu states that children's portions are available. There were a couple of children present on our visit. In the set of toilets towards the back left of the pub, one of the ladies cubicles has a shelf with a nappy change mat (gents' not checked for this).

Accessibility: Very small step to get in at the left-hand entrance (larger steps at other entrances). The bar and most of the seating are on the level, but some of the seating is on a dais. No steps to toilets. There are two sets of toilets — in the set towards the back left of the pub, one of the ladies cubicles has a door that opens out and a shelf with a nappy change mat.