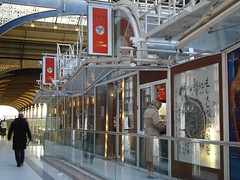 Japanese restaurant on the upper concourse of Liverpool Street Station, focusing on serving only sustainably-sourced fish and seafood. It used to be part of a small chain, but the Canary Wharf branch has now closed, and the Brighton branch is independent. They also offer takeaway, but only for sushi boxes and platters.

The room is dominated by a conveyor belt system with seating for around 25–30 people, but there are also separate tables; some in raised booths with a sand zen garden underneath, and some in smaller booths overlooking the station platforms photo of the view. Customers sitting at these tables can order not only sushi but also a good range of non-sushi dishes including eel, fresh cooked fish, meat, and noodles. Billy once had something involving poached daikon that was rather good. They also do a range of Japanese sweets and desserts, which are very unlike the average British pudding and quite nice.

They do various offers throughout the year; these change monthly, but in the past have included free octopus & wakame salad if you spend over £10 (September 2011) and half-price sake (August 2017). You have to pre-register as a member on their site (and wait up to 10 days for a membership card), but they're not hugely strict about membership; if, for example, one person in a group of four has a membership card, then that's fine (confirmed via email, August 2007).

Kake first visited on a Wednesday lunchtime in January 2007; it wasn't horribly crowded, but wasn't empty either. I didn't have to wait to be seated, but then again I was on my own. Most of the other people around the conveyor belt were men in suits; not surprising, given the location.

The quality of dishes on the belt was pretty good, and the range more interesting than at any Yo Sushi branch I've tried; not just the normal standbys like salmon/tuna rolls/nigiri/sashimi, but some more interesting stuff too, like lotus root with seaweed and fried chicken skin, and another dish involving some kind of white fish wrapped around julienne vegetables. The conveyor belt was kept full (double-stacked, so you have to be quick if you want something off the bottom layer!) and varied.

I saw several “sushi set” orders being made up for the booths/tables; the sushi for these wasn't made to order, but taken from pre-prepared boxes (and occasionally also from the conveyor belt). (This is not a criticism, since they really were quite busy; just a note.) My bill included a cover charge of 50p; I don't know if this applies all the time or only at peak times.

Kake visited again in August 2017, and this time sat in one of the booths. There were only two or three other customers when I arrived around 5:30pm, and it was still fairly quiet when I left just over an hour later. Music was playing quietly.

Seaweed salad (£3) photo included several different types of seaweed, so looked very attractive, but was surprisingly flavourless. It was topped with some fried tofu which was presumably supposed to be shredded, but the pieces hadn't quite been cut all the way through so clung together like a sort of beancurd octopus. Similarly, there was a huge piece of seaweed in the middle of the salad that hadn't been cut up, and required four bites to finish it all (as well as being a little gritty in the centre).

Fastnet sushi set (£11 for three nigiri, one gunkanmaki, and five maki) photo was fine if unexciting. The rice was underseasoned to my taste, but this is just personal preference, and it was cooked perfectly competently. Prawn head crispies (£2.50) photo were good value, and a good way of using a part of the animal that would otherwise be thrown away. The flavour was a little too browned for my taste, but this is clearly a trade-off between flavour and texture, and I liked the texture very much.

Service was well-meaning, but somewhat unpolished and awkward; it also wasn't easy to get the staff's attention. A 10% service charge was auto-added to the bill.

Accessibility: A ramp to get in. Much of the seating is on high stools or up steps, and the only normal-height seating on the level is in small booths which can be a bit of a struggle to get into and out of. The toilet cubicles have sinks inside, making them so narrow that even the slimmest of people would likely need to go in sideways.

Getting here: It's a little tricky to find; it's on the upper level (ground level), along a little side corridor next to the exits to the bus station.