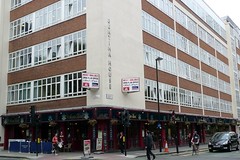 The beer was decent and cheap. When visited in May 2007, a pint of Itchen Valley Fagins was £1.99. The food was acceptable and cheap as you would expect for a Wetherspoons. The Wild West platter was a lot of food for £7.

Kat and friends visited on a Tuesday evening in October 2015. It wasn't too busy or noisy, with several tables free near the back. All but 1 of the 10 handpumps were on, a pint of Oakham Ales Owl & Pussycat was relatively fresh and well kept. Food arrived very promptly after ordering, and tasted fine considering the cheap Wetherspoons prices (a cheese and ham panini and chips plus a pint was around £6).

Accessibility: there are several double-door entrances, but they all seem to have at least one step. The bar area is all on one level; towards the back of the pub there is raised seating area with several steps. Toilets are at the rear in the raised area (didn't check if there was a RADAR-locked toilet).