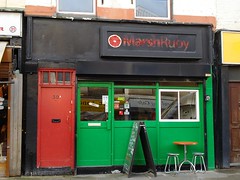 Marsh Ruby was a small curry restaurant and takeaway on Lower Marsh near Waterloo Station. It has now closed. As of early 2015 the premises are occupied by a Korean restaurant called Po Cha, which relocated here from St Giles High Street when its old premises were closed due to Crossrail.

Marsh Ruby is a small curry restaurant and takeaway on Lower Marsh near Waterloo Station.

Harjit Mann and Ingrid Campos started out some years ago selling take-away curries from a van in the Lower Marsh street market for three lunchtimes a week. In 2005 they took out a lease on 30 Lower Marsh, and now employ two kitchen assistants. The clientele are mostly regulars from the various offices and small businesses in the immediate area.

Just like when they were working from their van, they have a simple menu and are highly efficient. They still only do lunchtimes, though now from Monday to Friday. After queueing up at the counter (no table service), you give your order (remember to say whether it's take-away or eat-in) and within 60 seconds your curry is there.

If are eating in, you can simply have it there at the counter, but you might get bothered by the permanent queue behind you. It's better to take it to the back room which is brightly lit with bright yellow walls and bright red tables (a traditional curry house this ain't). It can get crowded, so you are expected to share tables.

The menu is almost always composed of two chicken dishes, a diced lamb dish and two vegetarian dishes, and sometimes a seafood one on Fridays. The chicken is free range, and in general the food is organic. They don't do beef.

The meals come in two sizes: regular and large. The meals aren't as big as you'd get in a traditional curry house, so most people order the large. You can combine two half-portions of different curries instead of a whole portion.

They don't have a drinks licence, but they do have a range of organic colas, ginger beer, juices etc.

Rowley Birkin QC has had on average one meal a week for eight years (do the maths) from this place and never had an adverse bodily reaction.

Addendum: I wrote most of the above at the end of 2007 (but didn't post it then). In the meantime, they closed for nearly three months due to hospitalisation, but reopened in March 2008. They have two new kitchen assistants who are still learning the ropes, so they are not yet up to their usual speed. When I visited shortly after they reopened, I had a half-portion of chicken curry and a half-portion of lentils with spinach, along with a pitta bread. Cost: £4.70.