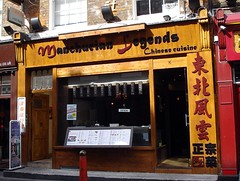 Chinese restaurant in Chinatown. It's located on Lisle Street, where Sushi Gaga (and before that Okawari) used to be, and it's owned by the Restaurant Privilege group, who also owned Sushi Gaga and who still run Leong's Legend and many other East and South-East Asian restaurants around London.

It's small and cosy inside, with a yurt-style fabric ceiling punctuated with hanging lanterns. A water feature trickles near the door, though on our June 2015 visit this sounded more reminiscent of a dripping tap than a mountain stream. Tables are wood-effect melamine, and there's a booth or two further in.

The menu primarily covers regional Chinese food from Dongbei (northeast China) and Xinjiang, though there are some set menus at the back offering a more Anglicised style of Chinese food. Vegetarian options are clearly marked, and there are enough of them to put together a reasonable meal.

Kake and bob visited on a Thursday evening in June 2015. It was fairly empty when we arrived around 5:45pm, but customers started arriving very quickly after that, and it was basically full by 6:30pm. Music was playing, not too loud, but rather slushy in style.

Chilled aubergine with mashed garlic (蒜茄子; £6) photo was pungently garlicky with plenty of raw garlic; the aubergine was also handled well, neither undercooked nor overcooked. Grilled pointed green peppers with minced pork (虎皮尖椒; £9) photo were a good-sized portion, and the chilli skins were nicely blistered and not too tough. The sauce was quite unsubtle, but its saltiness worked well with rice. Pork belly and pickled cabbage stew with glass noodles (酸菜五花肉燉粉條; £10.50) photo was a little bland, and the glass noodles were sadly overcooked, though the sourness of the pickled cabbage came through nicely. Rice was fine.

Overall, the food was less impressive this time than on Kake and Sarah's previous visit to its old location on Macclesfield Street photo (the old premises of Cẩm Phát and New Laughing Buddha), from which it relocated to Lisle Street in mid-2012).

That time, on a Tuesday evening in August 2011, everything we tried was good. A cold dish of shredded kelp (涼拌海帶絲; £4.50) photo was a very generous portion, and nicely seasoned. Cucumber with mandarin pork (肘花拍黃瓜; £4.50) photo, another cold dish, had great flavour, and although the texture of the meat was as interesting as pork knuckle usually is, we actually ran out of the cucumber part before the pork part. Pork and pickled vegetable dumplings (豬肉酸菜水餃; £5 for eight) photo were just as they should be, and plain rice (£2/person) was fine. The highlight of the meal, though, was the braised pork with glass noodles (紅燒肉粉條; £8.50); cubes of red-cooked pork belly, braised long enough that the skin was almost as soft as the fat, mixed with a tangle of thin, slippery, chewy potato starch noodles.

Kake's verdict: I really quite liked the food on my first visit, but was a little disappointed on my second (and this time it also felt a bit expensive for what we got). Other reviews (linked below) also suggest some inconsistency in the kitchen.

Accessibility: Two steps to get in. Toilets are down a winding staircase with a non-continuous handrail on one side most of the way down.