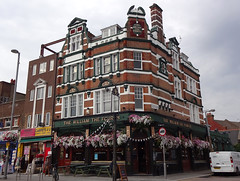 Pub near the Bakers' Arms intersection in Leyton, housed in a large and imposing Victorian building.

It was previously owned by Brodie's brewery (see old version of this page for more details), but was sold to Rose Pubs in Spring 2018. It then closed for a refurbishment, but reopened in late May 2018.

There's plenty of room inside, with spacious front and back sections as well as a courtyard-style beer garden leading onto the old brewery shed, now repurposed as a bookable seating area. Stools flank the unusual W-shaped bar in the front section, with an equally unusual gantry above mounted with lamp-style lighting. A pool table sits in the middle of this section. In the back section, the bar has been converted to a semi-open kitchen. The floor is bare boards, tables are dark-varnished wood, and seating is a mix of chairs, stools, and banquettes.

Kake visited on a Tuesday early evening in September 2018. Music was playing, a mix of goth and indie, perhaps a little louder than ideal for conversation. Service was friendly and helpful.

Although there are a dozen handpumps on the bar — a legacy of its past as the home of Brodie's — only four of them were clipped, offering Crate Golden (£3.50/pint as the "ale of the day" pre-7pm special offer), Wild Card Session IPA, and two flavoured ciders from Seacider.

Kake's falafel and halloumi wrap (£9.50) photo was a bit odd. The halloumi and roasted peppers were fine, but the advertised caramelised onions were only lightly cooked, not caramelised, and there were hardly any of them. The hummus and falafel seemed very homemade, and not in a good way — the hummus was sludgy in texture and indistinct in flavour, and the falafel was a sausage-shaped mishmash of ingredients, with the only obviously identifiable one being overcooked green peas.

This was all wrapped up in a decent enough tortilla-style wrap, which had than been drizzled with a reduced vinegar sauce, making it impossible to eat with one's hands. The fries on the side were much better — crisp, non-greasy, and with a good potato flavour.

Accessibility: A step to get in. No further steps to the toilets. A large step to the beer garden, and a steep ramp from there to the "Old Brewery" seating area/function room.