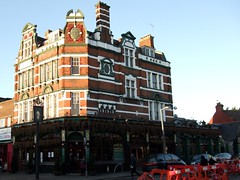 A large and imposing Victorian building which houses a very respectable brewpub, near the Bakers' Arms intersection in Leyton. The pub's own on-site microbrewery used to be called the Sweet William (brewing beers under the Brodie's label), but we're not sure if they still use this name.

For all its outward Victorian gin palace style, the strength of this place is in its unflashiness. There are two extensive rooms with no shortage of tables, and banquette seating along one long wall, with bars serving both (though on all Ewan's visits over the years, only the front bar has been serviced) photo of back room. Large TV screens hang up above each room, one showing sport, though the sound isn't too loud. Some of the Victorian fittings have been retained, with the old Ind Coope branding still visible on the ornate mirrored bar backs.

Beyond the rear bar is a small beer garden area, attractively laid out with plants, and fenced off from the street, open to the sky for smokers, but with a bit of covered bench seating. Inside, there's an open fire which may be used during the winter. In short, it's a comfortable well-kept pub with plenty of seating, a diverse clientele, friendly staff and a great range of beer.

In fact, it's the beer that provides the key to the place's success. Their own Brodie's ale is on the majority of the eleven handpulls on the main bar (there's another five on the rear bar, but these appear to not be in use), and available for the very favourable price of £1.99 a pint. This itself would be some recompense if the beer were disappointing, but it's certainly not that, and covers a good range of styles. Being summer on our June 2009 visit, the ales available on handpull were lighter golden ones, such as the Amarilla (the pick of the ones we tried, with a fruity tang), English, and Red. However, plenty of others are available bottled, and seasonal brews such as a Mild and a Porter are also sometimes available. Apart from the house brew, Crouch Vale's Crouch Best, Fuller's ESB, and Dabinett cider were also on handpull, with a chalkboard listing some upcoming ales. In addition, draught taps dispense Guinness and lagers, including San Miguel and other usual suspects.

There's a short food menu on a chalkboard, and comments on the web suggest they offer decent Thai food in the evening, though as Ewan and Kake visited after 10pm, we couldn't confirm. On subsequent visits, Ewan has found a fairly short menu of pub classics like burgers and sandwiches, as well as a glorious macaroni and cheese.

They have a number of special beer-related events during the year, with an annual Easter beer festival called the Bunny Basher which sees most of their taps (both cask and keg) in use for Brodie's more experimental one-offs, including a good range of sour beers, and a 22% barleywine called Elizabethan. The mix of clientele even during festivals is split between locals and beer tourists, with a relaxed atmosphere ensuring there's never any trouble.

They also have accommodation available: eight ensuite rooms above the pub.

Accessibility: One step up to get in; but once you're in, it's stepfree to the bar, seating area, and toilets. Didn't see a specifically marked accessible toilet.