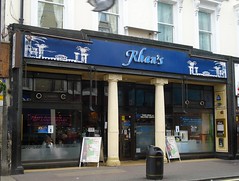 Long-standing Indian restaurant on Westbourne Grove in Bayswater; according to its website, it was established in 1977.

It's quite large, with a front room and back room providing seating for at least a hundred people. The space is broken up by pillars, decorated with painted moulding as fake palms, and the walls are painted with a trompe l'œil scene of a mountain lake, with sky and clouds rising up to continue over the ceiling. Tables are covered with pink linen, overlaid with disposable white paper, and both (paper) napkins and plates are branded with the restaurant's name photo.

Kake visited on a Tuesday lunchtime in October 2016. There were two other customers when I arrived around 12:15pm, and a few more arrived while I was there, almost all on their own for a quick lunch. No music was playing, but there was a fairly loud background hum, possibly from a fridge.

Although they offer a lunchtime buffet, I went for the main-menu prawn biryani (£8.35) photo. It didn't have the little pockets of smokiness that would indicate oven-cooking, but it was fine for what it was. The prawns were juicy, flavourful, plentiful, and not overcooked, and the rice was neither dry nor soggy. The fried onions on top were chewy rather than crispy, but had a good flavour. There were a few small slivers of green pepper throughout the dish, competently cooked, but I wished there had been more of them. The raita on the side had nicely chunky cucumber and tomatoes and made a good accompaniment.

Service was fine, and they made sure to clarify whether I wanted the prawn biryani or the king prawn biryani. Tap water arrived swiftly in a large metal jug. A 10% service charge was auto-added to the menu.

All the food is halal, according to a sign in the window in October 2016. They don't serve alcohol, and an old version of their website suggests they may not be too keen on letting you BYOB either). They do offer a wide range of soft drinks though, including falooda, lassi, freshly-squeezed juices, and non-alcoholic cocktails.

Child-friendliness: They have a reasonably extensive children's menu. There's a pull-down nappy change in the ladies' toilet (gents' not checked).

Accessibility: No steps to get in, though the door is quite stiff. Toilets are in the basement, through another rather stiff door and then down a flight of stairs with one bend and a sturdy handrail on one side.