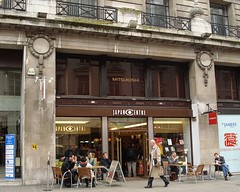 One-stop Japanese shop on Regent Street near Piccadilly Circus, next door to (and possibly associated with) Mitsukoshi. Previously located on Piccadilly photo, it moved to its present location in 2009.

At the front of the shop are chillers containing pre-packed trays of sushi to take away, as well as a hot food counter. (Note that while the takeaway sushi at the old location used to be supplied by Restaurant Yoshino, Yoshino and the Japan Centre are no longer associated; the Japan Centre's sushi is now under their own brand of Umai.) There are a few tables outside on the pavement and some more inside, to eat your purchases at. According to the London Insider, the sushi is sold at 50% off at the end of each day.

Further back is the food hall, which stretches back quite a long way and includes a bakery section, a magazine aisle, and a small ceramics section. Also on sale are fresh vegetables, pre-cut raw and seared meats, fish and seafood, and lots of other grocery items including yuba, various seaweeds, various kinds of miso, soy sauce, sushi rice, etc. Three or four freezers at the back hold natto, dumplings, and sweets.

On Kake's March 2010 visit the vegetable selection included lotus roots, fresh burdock, and shiso leaves, while notable items at the seafood counter were oysters and real fresh wasabi roots (priced at £21 apiece, though this blog post suggests you don't have to buy a whole one).