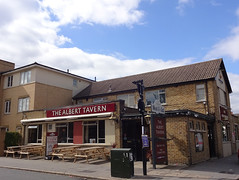 It's a pleasant enough 1960s estate pub, with a low ceiling and an interior divided into several different areas including a wooden-floored section with high tables, and a couple of tucked-away carpeted sections with banquette seating. A dart board hangs on one wall. There are a couple of picnic benches out the front, and a part-covered patio smoking area at the back.

Kake visited on a Wednesday afternoon in August 2016. Two of the four handpumps were on, offering Otter Amber (£1.60/half) and Greene King IPA. The Otter came out of the pump fairly lively but was in perfectly fine condition when I drank it.

There were several people in when I arrived around 2:45pm, in groups of various sizes including what looked like a family, and plenty of lively but not overly-loud conversation. Music was playing fairly quietly.

Standard pub food is served all day from a chain-wide menu.

They have free WiFi via The Cloud, which requires signup but doesn't require you to use your real email address. According to a notice seen in August 2016, there's a quiz every Thursday and a meat raffle on Sundays.

Child-friendliness: They have at least two highchairs, the type with no tray and very little back support. There are nappy change facilities in the accessible toilet.

Accessibility: No steps to get in, and step-free throughout inside, including to a RADAR-locked accessible toilet with nappy change facilities. A small step to the back patio.