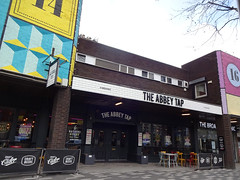 Stonegate pub in Stratford. It was previously known as the Langthorne photo, but in 2018 Stonegate renamed it to the Abbey Tap and rebranded it as part of their "Craft Pubs" sub-brand.

It still feels like a chain pub, though the previous more traditional feel has given way to more of a bar sort of ambience. There's very little natural light inside, and the ceiling is low. Varnished wooden boards cover much of the floor, giving way to geometric tile designs around the bar. The upholstery designs are geometric too, and pink neon lighting strips on the ceiling suggest that the management seek a "buzzy" vibe rather than a relaxing one. Entertainment options are offered by silently-flashing fruit machines and at least six flatscreens including one large projection screen. There's outside seating at the front, partially covered.

Kake first visited on a Thursday afternoon in December 2014. There were a fair few people in when I arrived around 4:30pm, and it remained well-populated throughout my visit, though there were always free tables. Music was playing, very loud, and I was quite glad I was on my own and not trying to make conversation. Two real ales were on: Wychwood Hobgoblin (£3.50/pint) and Greene King IPA. A pint of lime and soda was 60p, and a packet of pork scratchings was £1.25. Service was friendly.

Kake visited again in October 2018, after the rebrand, in the company of bob. There were just two other customers when we arrived around 11:15am. The flatscreens were showing snooker with the sound off, and '90s music was playing. All four handpumps were clipped, offering Robinsons Trooper, Gales Seafarers (£4.30), Adnams Mosaic, and Sharp's Doom Bar. They also had ten keg taps for craft beer behind the bar, mainly mainstream options such as Meantime and BrewDog. A pint of lime and soda was 40p.

Traditional pub food is served all day from a chain-wide menu.

They have free wifi via The Cloud, which as of December 2014 requires registration and provision of email address, mobile phone number, and date of birth (though it doesn't check you've told the truth about any of these).

Kake's verdict: I thought it was OK before the rebrand, but I'm not a fan of the new ambience.

Accessibility: Step-free to bar, RADAR-locked accessible toilet, and some of the seating area. The rest of the seating is on a dais. Other toilets are up a flight of stairs with a sturdy handrail and three bends. All the seating on the level is now either backless benches, high stools, half-round seats with fixed arms, or banquettes fixed close to tables.