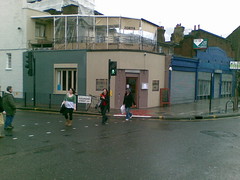 This is now a bar/restaurant called CocoBamboo.

Eastern European restaurant in Chalk Farm. It extends over three floors, including a covered terrace for smokers on the roof. The interior is quite nice photo. It's a bar as well as a restaurant; you can go in and just have a drink.

Bob visited for a late lunch around 2pm on a Saturday in March 2008. Only one other table was occupied when I arrived. I started with the Hungarian goulash soup photo; it was quite tasty, with plenty of meat, though possibly a bit fatty. My main course was bigos photo, which was very very good, with lots of lovely meat, and well presented. I finished with baklava photo which were again very well presented, but not very exciting as they were just six pieces of the same thing (all sesame).

They have an interesting cocktail menu, mostly based around vodka (they also have a list of around 250 vodkas, if you feel adventurous). I also tried the firestarter cocktail photo, which was made from chilli-infused vodka, pineapple, and something else. It was pleasingly warming.

Service was attentive; I was brought lots of bread and they made sure I was well-supplied with drinks. I'd probably go back if I was in the area.