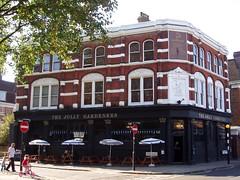 Zeitgeist was a German pub in Lambeth, housed in a building that was previously the Jolly Gardeners pub. In April 2021 the owner announced on Twitter that Zeitgeist would not be reopening at that location, and that new owners would be taking over the pub building to run it under the old name of the Jolly Gardeners (see also Kennington Runoff blog post).