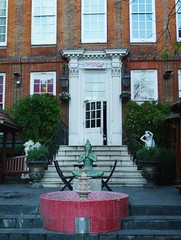 Large Thai restaurant situated in a Georgian listed building on Stoke Newington High Street. It's actually been around in Stoke Newington since the 1990s, but moved to its current premises in early 2006.

Kake et al. visited on a Friday evening in September 2007. Although it was very busy, the service was still acceptable, in that orders were taken without too much fuss and the correct food arrived. Juliet thought it was initially slow — it took some time to catch a member of staff to give drinks orders.

We were mostly eating vegan (options were present but limited), so in fairness didn't give the menu a proper tryout, but the overall impression was that the food was good (at best) but not great. Good selection of cocktails, though, and well executed.

Probably best for large groups, rather than an intimate dinner. It was very loud, and difficult to hear people; and overly dark. It might be quieter midweek, though.