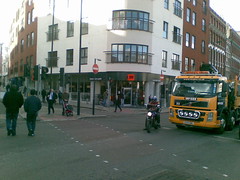 Now closed; was a Yo Sushi branch near Farringdon Station. According to Good For Lunch, as of June 2013 it's due to become a branch of Pret A Manger.

Yo Sushi branch near Farringdon Station. They also do takeaway, and you can order online (for pick-up only, not delivery) via their website.

This is the usual Yo!Sushi setup, with a conveyor belt taking in most of the fairly large space, stretching around a corner at the end of this city block. There are tall seats by the conveyor belt, as well as little booths for 2-3 people, and some larger tables for larger groups.

At each seating position, there are taps for still and sparkling water, chopsticks, soy sauce, sauce bowls, and other useful things you might want. Service is brisk as you'd expect, but friendly and efficient too.

Ewan visited on a Friday lunchtime during a time they were offering a special 40% deal, and was able to be seated without trouble at 1pm, though it got a little more full within the next half hour. Food came quickly when requested, and the vegetable handroll was particularly nice, though it had mayonnaise on it.