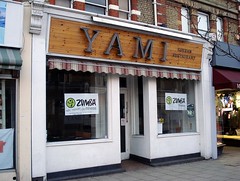 It closed down for a bit around the start of 2011, but according to Chowhound it's back open again.

The visit described below was before the closure, so some things may have changed.

Billy, bob, Martin and Northern Steve visited on a Thursday evening in February 2009. When we arrived at about 9pm there were two other tables being used. All the tables have gas stoves needed for Korean barbecue. The lampshade also doubles as an extractor fan.

We ordered four appetisers and four things for the grill. This was more than enough food, especially since they bring you side dishes of kimchi and other pickles as well and are happy to give you more of them if you ask. Our total bill including including beer (OB) was about £100. No service charge was added.

While we ordered the appetisers in expectation of having them as starters they turned up at random points throughout the meal. This was actually quite good since we had to wait for the Korean BBQ stuff to cook.

For appetisers we had kimchi pancake photo, deep-fried shrimp (£9), stir-fried baby octopus in hot spicy sauce, and a pork dish ("stir-fried pork in sauce"). The pancake was really good. The shrimp were very large and tasty, as was the pork. The octopus was fine, although eating an entire baby octopus is always fun. Portion size for the appetisers was pretty large and they would have done as main courses. (With hindsight, I think we may have misinterpreted the menu — could it be that the appetisers were only the first column, and the other items we ordered were simply non-grilled main courses? --Martin)

For the grill we had marinaded eel in a chilli sauce, thinly-sliced pork belly, pork belly in chilli sauce and ox tongue. These also came with aged kimchi and tofu, which were warmed on the grill, and were all pretty good. The waitress did the BBQing for us and talked to us about the various dishes. The service was very friendly and helpful.