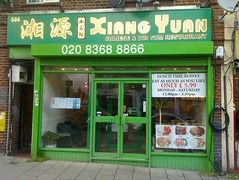 Xiang Yuan was a Chinese restaurant in New Southgate just by Arnos Grove Station, specialising in Hunan food. According to Google Street View, it closed down by June 2015.

This is a small local restaurant with basic decor. A table by the door serves for takeaway customers to wait (of which there were a few while we were there on a Tuesday evening), and a number of tables in a rectangular room. Judging from the sounds of singing later in the evening (and verified by the waitress), there is a karaoke room towards the rear of the restaurant, though we didn't see this.

The food menus they present guests with offer a fairly standard range of Anglo-Chinese dishes, though on further questioning we were brought the (more heavily illustrated) Hunan menu, though not all the dishes were available. (See below for links to photos of the Hunan menu.) The waitress patiently pointed out each of the available dishes from the menu, probably about a quarter of it at most. Dishes were brought out as they were cooked, with a few minutes between each one.

We started with some aubergine photo, which was delightful: crispy chunks of aubergine yet covered in a sticky sweet sauce. The Chairman Mao's red-braised pork (£9) photo was also excellent, if not particularly spicy, but featured good sized chunks of nicely cooked pork.

A little less impressive was the stir-fried lamb (£9) photo, charmingly advertised on the menu as being "with hot peppers and a zesty hit of fresh coriander", but with no such flavours particularly evident (and certainly no peppers, just onions). However, the lamb was good and tender, and made up for the lack of seasoning elsewhere. A plate of dry-fried green beans with minced pork (£8) photo was fairly bland.

The final dish we were served was the steamed seabass with fresh green chillies (£13) photo, an impressive looking dish which seemed to feature all the hot flavours omitted in the other dishes (it was certainly very spicy). The fish was fine, perfectly cooked, if rather underwhelming in the end.

Service was very friendly and helpful.