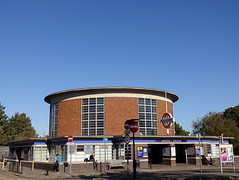 The entrance/ticket hall has two exits, one opening west to the car park and another opening south to the bus stops (but really, these hardly count as separate exits).

There's a newsagent/confectioner/tobacconist inside the entrance hall, also a florist, but no other facilities that Kake noticed as of April 2007.

There's a pay and display car park outside, and several buses also stop here (the 251 and the 298 terminate at the station).