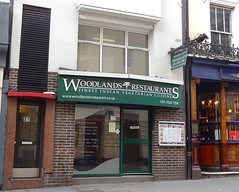 Vegetarian South Indian restaurant on Panton Street near Piccadilly Circus, part of a chain and in the 2007 Good Curry Guide.

The food is South Indian — dosas etc — and some thalis. As of December 2008, they're advertising a lunch buffet for £7.50, available Monday to Friday. They have some dishes without onions and garlic, but secretlondon didn't see anything listed as specifically vegan.

secretlondon has been twice now, the most recent visit being in August 2009. Both times I've found it fairly unexciting. In August 2009 I had the Delhi royal thali (£17.50), which was unexciting and not very spicy. To drink, I had chaas (£2.75) which was lassi with cumin and coriander. This had a kick, and I liked. I asked for shrikhand to finish, but they didn't have any so I had an pistachio kulfi which didn't really taste of pistachio. It wasn't as bad as the factory made ones but was still dull.

We had a real farce at the end where they charged us for the missing shrikhands rather than their cheaper replacements. They tried to pretend that there was only 25p difference between the two rather than the pound that it actually was, and then came back to insistently ask why we hadn't paid the full service charge. I really don't think I'll go back here.

Accessibility: Step to enter, more stairs inside and toilets down stairs in the basement.