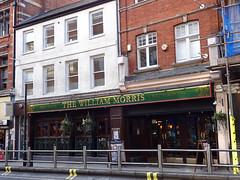 Wetherspoons pub in Hammersmith, near the stations. Previously part of the Lloyds No 1 sub-brand, as of March 2012 the Pubs Galore comments linked below note that all the Lloyds branding has now been removed and it seems to be a regular Wetherspoons again.